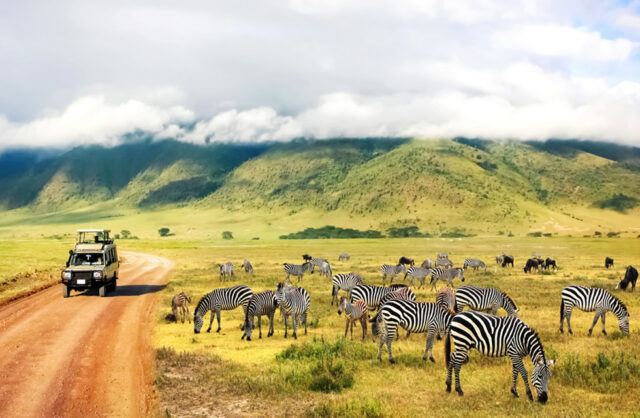 Africa is endowed with some of the best tourist attractions in the world. Here is our list of the best safaris in Africa (in no particular order).

1. Tanzania
Located in East Africa, Tanzania is endowed with some of the most popular African safari attractions; among them Mount Kilimanjaro, Ngorongoro Crater and the Serengeti National Park. Tanzania is also home to a thriving population of wildlife that inhabit the country’s numerous national parks and reserves – making it home to some of best safaris in Africa.

Top destinations in Tanzania include Zanzibar and Mafia islands, Selous National Park (one of the world’s largest national parks), Ruaha National Park and of course Mount Kilimanjaro, Ngorongoro and Serengeti.

2. Morocco
If you are looking for the best safari in Africa, Morocco may be your ideal destination. Located at the mouth of the Mediterranean Sea, the country offers breathtaking sceneries and attractions.

The North African country is renowned for its rugged but superb looks, especially the expansive Atlas mountains and the awe-inspiring Sahara desert.

Running between the Atlantic coast in the southwest to the Mediterranean Sea in the northeast (about 2,400km), the Atlas mountains offer a spectacular scenery of Morocco. The Sahara desert is on the other hand a favorite location for many Hollywood movie actors.

Morocco is also endowed with an expansive coastline that boasts 120 high quality beaches, most of which are safe for swimming. Other popular destinations in Morocco include the capital Rabat, Casablanca and the ancient city of Marrakesh.

3. Uganda
Located in East Africa, neighboring Kenya and Tanzania, Uganda is a small but stunning destination. The landlocked country is home to Africa’s largest mountain range – Rwenzori and the highest concentration of primates on earth, among them the endangered mountain gorilla which can be found in Bwindi Impenetrable National Park.

Uganda is also the source of River Nile – the longest river in the world, and the country offers some of the world’s best white-water rafting around Jinja. Some of the most popular destinations in Uganda include Rwenzori, Bwindi and Queen Elizabeth national park as well as the capital Kampala, Entebbe and Jinja town. Are you looking to a budget safari in Africa? This is the ultimate destination to visit. Uganda was ranked 1st in the Lonely Planet’s list of the Top Countries for 2012.

4. Namibia
Located in south western Africa, Namibia is endowed with unspoilt landscapes and a thriving population of wild animals.

Despite its harsh climatic conditions, Namibia has some of the world’s most stunning national parks. These include the Namib-Naukluft Park in western Namibia and the Etosha National Park in northwestern region of the country.

Some of the most popular destinations in Namibia include the spectacular Fish River Canyon National Park to the south, Namib Desert (believed to be the oldest desert in the world), the capital Windhoek and of course Etosha and Namib-Naukluft national parks.

5. Mozambique
Situated in Southern Africa along the Indian Ocean coastline between South Africa and Tanzania, Mozambique is gaining much popularity as a foremost African holiday destination.

Mozambique is endowed with favorable climatic conditions and a 2,500 km coastline that is lined with high quality beaches and lagoons, most of which are safe for swimming.

While on holiday in Mozambique, visitors have the option of spoiling themselves at the expansive beaches or taking game viewing safaris in the country’s national parks and reserves. Mountain hiking is also possible but not recommended due to the large number of landmines that were left in the mountains during the civil war of the late 1980s and early 1990s.